Wylie Thunder Road in Aberdeen has been providing summer entertainment for families since 1994. It is a family owned and operated business. The family entertainment center began with an 800 foot go-kart track and after its first summer open, a bumper boat pool was added. The park continued its expansion in 2004 with the construction of a miniature golf course, featuring rippling streams, waterfalls, fountains, colorful landscaping and a fire shooting volcano.  In 2012 Euro Bungy was added.  In 2014 Thunder Road added Laser Maze Challenge and in 2015, Beam Buster was added to the Laser Maze Challenge!  In 2019 Thunder Road celebrated its 25th year in business in Wylie Park.

All of the go-karts run on E-85 Ethanol “America’s Renewable energy source” produced right here in the Aberdeen area. The Ethanol is produced by Advanced BioEnergy in Aberdeen, Glacial Lakes Energy in Mina and Poet in Groton. The go-karts have been running on E85 since 2005.

Wylie Thunder Road is located in Wylie Park. The location has proven to be a great spot for family entertainment. The park is a wonderful place to camp, visit the zoo and Storybook Land. Other Thunder Road locations include Sioux Falls, SD, and Watertown, SD.

Thunder Road Family Fun Parks are great places to bring friends and family. Not only do the parks provide good, clean family entertainment for all ages, they employ about 80 people from high school kids to adults who want a fun and exciting summer job.

GET A
FREE RIDE
TODAY!

FREE RIDES
FOR YOUR BIRTHDAY

Birthday ClubSIGN UP YOUR KIDS 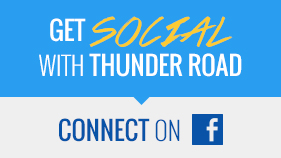